"Red" Vamirio (ヴァミリオ, Vu~amirio) is the deuteragonist and one of the main characters of Helck. She is one of the Four Heavenly Kings of the Empire where the Dragon resides.

Vamirio in her usual attire 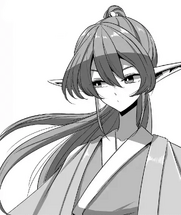 Vamirio is very hotheaded yet cautious, often donning a scowling expression. She has a tendency to call others, including herself, stupid. Despite those traits, she cares about the well-being of the civilians in the Demon Kingdom and thus has a hard time trusting newcomers. [5]

Vamirio had previously voiced the opinion that the humans must be destroyed, but has changed since she met Helck. She considers friendship very valuable and would be pained to see Helck kill his old companions even if it was for the betterment of Demon Kingdom. [6]

As one of the Four Heavenly Kings and as someone who possesses a power level of 78, Vamirio is very powerful. She is implied to be stronger than Azudora in terms of raw power. She specializes in handling groups of enemies. [8] [9]

Fire Magic: Vamirio's favorite type of magic. Through the use of this magic, Vamirio can create, shape and manipulate fire. She is capable of incinerating various opponents in an instant. However, her wide area attacks are dangerous to nearby allies, but she has learned to control her attacks. Furthermore, she is able to use her fire to soften her fall. [10] [11] There are instances when she has used her flames like a smokescreen. [12] She is powerful enough to break through Rafaed's barrier even after it had been reinforced by numerous human mages. She uses fire magic a barrier to lessen the impact of attacks.[13]

Summoning Magic: Vamirio is capable of summoning fire elementals. These minions can serve Vamirio either by exploding upon contact or fighting her opponent. Her skill in summoning is noted to be great, as she can summon multiple beings at once. [17]

Enhanced Senses: Vamirio can hear much better than others. This allowed Vamirio to work up a plan with Asuta without having the humans anticipate it. [20]

Immense Durability: Although Vamirio is seen mostly dodging, she is more than capable of taking a hit from Berserk foes.[21]

Immense Speed and Reflexes: Vamirio is extremely fast and possesses remarkable reflexes, shown as she was able to outmaneuver Rafaed. [22] In addition she was able to react to arrows fired from behind and surprise attack beams. [23] [24]

Master Magic User: As one of the Four Heavenly Kings and formerly under the care of Azudora, Vamirio has become a powerful magic user. She is able to easily summon creatures at will and create large bursts of fire. She can create flames of various temperatures. She is able to fight of thousands of soldiers that are constantly being resurrected while fighting Rafaed and Mikaros. [26]

Twiglion (コエダリオン, Koedarion): A magical stick that Vamirio used when she was an infant, made from Yggdrasil. It is an ecological item which reduces the amount of wasted magic. Furthermore, it increases the power of offensive techniques. [27]

Hero Killer: Vamirio wields a broken sword called the Hero Killer that can inflict fatal injuries on a hero. Helck gave this sword to Vamirio in case he ever goes berserk. [28]

Community content is available under CC-BY-SA unless otherwise noted.
Advertisement